Whilst visiting the Cotswolds in late May / early June we returned to one of the National Trust’s most exciting garden for plantsmen, Hidcote Manor. But more about that particular garden later. Within walking distance of Hidcote is Kiftsgate. The fact that it has been created and designed by women intrigued me. As a fan of Gertrude Jekyll I was interested to see what ideas other women could bring to a garden. Bought by Heather Muir and her husband after the Great War the garden was inspired by Hidcote and what Lawrence Johnstone was doing there. But it is a unique garden, not least because of the steep banks to the south of the house and marvellous views over the surrounding countryside; creatively designed and planted over the years by Heather, her daughter Diany Binni and granddaughter Anne Chambers.

Colour plays a large part in the design and forms a rich tapestry. Immediately next to the house and tea-room is Four Squares and Terrace, where a sundial forms the central point. The design is formal and edged by box, but the planting is not. Clumps of showy peonies, roses and honeysuckle mixed with salvia shock you with their beauty and fragrance. On the terrace with views towards Bredon and the Malvern Hills are two large terracotta pots filled with tulips in the spring. As spring was very late this year (2013) they were still blooming. You are then led along the Wide Border with its colour scheme of pinks and purples to the sunken original White Garden where the planting is no longer completely white. Paths lead you through to the new Water Garden which is very different in style being much more contemporary. The twenty-four stainless steel stems are topped with gilded bronze leaves moulded from a philodendron. They sway in the breeze and water drips from the leaves providing a soothing and relaxing tranquil spot in the busy garden.

The steep slopes have been made into terraces and steps lead down to the Lower Garden with views over the Vale of Evesham. Here you find more exotic planting which gives it a Mediterranean feel and there is a half-moon shaped swimming pool. Climbing back up the steep paths to the terrace you are glad to make your way to the tea-room for a glass of something cool.

Sundial in the Four Squares and Terrace 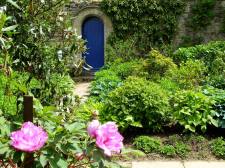 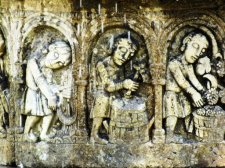 Details on the well-head 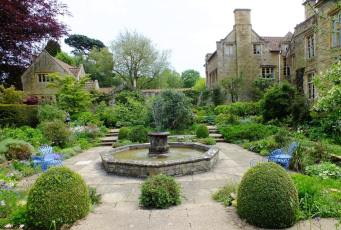 Steps down to the Lower Garden